The Community Relations Commission was established in 2019 by the city to prioritize diversity, equity, and inclusion issues. Durango established gender-neutral bathrooms at the commission’s recommendation and began live Spanish translations of city meetings. They also reinstated a bus route that served Westside Mobile Home Park residents.

“A lot of these people don’t have cars. People there are from working-class communities,” said commission member Olivia de Pablo Lopez. “The city graciously decided to return the route. And it was beautiful because the day the route was reinstated, the bus was filled with immigrants and children. They were chanting ‘¡sí se puede!’”

However, there was also tension over the CRC’s advisory role — friction between members built up over time.

“Whereas our involvement was productive, the only power that we have, technically, was to make a recommendation to the city council,” said Tirzah Camacho, the former commission chair. “Ultimately, what the council does with that is whatever they choose,”

On October 9, 2022, a Durango employee published a post on the city’s Facebook page. The post included a quote from Christopher Columbus and clip art of Columbus standing next to a ship.

To many, Columbus is a symbol of Native American genocide.

The city removed the post within a few hours and stated on its Facebook page that there was “no ill-intent involved.” But more criticism came in the weeks after.

“The city had a new staff who decided to post ‘Happy Columbus Day,’ and of course, some of my colleagues and myself were disappointed to see that,” said Olivia de Pablo Lopez.

The commission demanded the city issue a formal public apology. The Durango City Council convened a study session on November 15 and responded to the request.

“My position is that I think an apology was made, and I think it was a legitimate error,” said Melissa Youssef, the current Mayor pro-tem. “It wasn’t intentional, wasn’t meant to hurt or harm. It was corrected. It was taken down immediately.”

Two days after the city declined to apologize formally, Camacho and three other CRC members announced they would resign.

“It’s very real to talk about what activism does to people of color, to their bodies, to their peace. The adversity was culminating to a point where I just couldn’t, I couldn’t subject myself to it much longer,” said Camacho.

Olivia de Pablo Lopez decided to remain on the commission – she’s currently the only member.

“I decided to stay because, to the best of my knowledge, if we were all gone, the CRC was going to disappear,” explained Lopez. “If you are here to be an activist, you don’t leave. And although I understand there’s justified anger and a lot of historical trauma, we also need to find paths for healing.”

The incident highlights a challenge for the city of Durango: When it comes to social inequity and historical trauma, the path to healing is not straightforward. For some, the Columbus Day posting was an egregious insult; to others, it was a simple mistake.

“I was sorry to see them leave on that note, which was unfortunate,” said Mayor pro-tem Melissa Youssef on the resignation of commission members. “But it didn’t make a lot of sense for us to continue to focus on that one error. They did do some really good work, and for the efforts that they put forward.”

On the future of the CRC, Yousseff added, “Discussions have focused on making the CRC a community and region-wide commission that can represent the city, county, 9-R, and FLC. The commission would be more effective representing the entire community.” 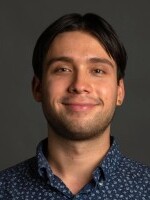 Clark Adomaitis
Clark Adomaitis is a Durango transplant from New York City. He is a recent graduate of the Craig Newmark Graduate School of Journalism at CUNY, where he focused on reporting and producing for radio and podcasts. He reported sound-rich stories on the state of recycling and compost in NYC.
See stories by Clark Adomaitis