As Colorado's Unaffiliated Voters Grow, So Do Efforts To Engage Them

Cliff Redish is a political exile. He lives in a world that's colored Republican red and Democrat blue. He used to be a Democrat, but now he's unaffiliated. Perched on a barstool in a pub in Carbondale on Colorado's Western Slope, he's hesitant to even talk about it.

"We're so divided," Redish said. "It's just unbelievable. It's hard to even bring this up in a bar right now."

A couple of things led him to leave party politics. First, Redish campaigned for Bernie Sanders, who won the last state presidential caucus in a big way. Yet it was Hillary Clinton who ultimately took the party's nomination in Colorado.

Listen
Listening...
/
If unaffiliated voters were a party, they’d be the biggest one in Colorado. KUNC's Michael de Yoanna traveled to the Western Slope to meet some of them.

"These superdelegates come in and all of a sudden, Hillary wins Colorado?" he said. "That's not a democracy."

Second, he looks to the right and he's turned off by what he sees as a narrow kind of patriotism spawned by Donald Trump's presidency.

He's part of a somewhat mysterious, often ignored, yet potentially powerful group in Colorado -- roughly 37 percent of active voters now declare no party. They are the top category of active voter, a shift from a generation ago in 2004, when George W. Bush was president. Back then the top voter affiliation was Republican.

What these unaffiliated voters want has long haunted pundits, consultants and candidates everywhere. They've been dubbed swing voters, but their politics are likely all over the ideological map.

Political consultant Jim Jonas of Denver is also an exile. In the 1990s, he worked with notables like Roger Ailes on ads for President George H.W. Bush and served as a communications director for Tennessee Sen. Lamar Alexander's presidential campaign.

He grew frustrated, though, as bipartisanship became a dirty word.

"There was this call for purity on both sides -- ideological purity -- for Democrats and Republicans that I didn't feel comfortable with at all," Jonas said.

So he became an independent. Today he wears a few hats, including as executive director of the National Association of Nonpartisan Reformers, an organization that's fighting to bring more participation to politics. Government, the association argues, has become "unrepresentative and unresponsive."

"It takes us until we have an absolute crisis before we're able to deal with anything and that's not new to the political process, but it's getting worse," Jonas said, adding that when solutions come they're typically one party's solution, setting the stage for conflicts that can linger years, even decades. 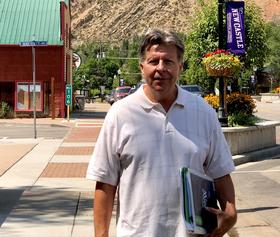 He's not surprised by the number of Americans, including Coloradans, who are registering to vote without allegiance to a party. One driving force is youth: About half of all registered voters in the state 25 years old or younger are unaffiliated.

"There's a whole lot more of them who are completely dissatisfied with what the duopoly is giving to us and if you can tap into that piece of it and say, 'We've got to get our government working again,'" Jonas said. "'There's got to be a better system than what these two parties are giving to us. Let's try it a different way,' then I think you've got something to sell."

His solution to long-brewing problems in Colorado, like low teacher pay or ever-congested highways, is to get more independent candidates elected at the state Capitol to act as mediators amid the partisans. He'd also like to see systemic changes that create more "competition, participation, and accountability" in elections.

His group is just one of many fledgling organizations across the country working towards that goal.

In Garfield County in March, Randy Fricke, a former Democrat who ran for Congress on the Western Slope in 2004, called for a meeting of independent voters of all ideological leanings. He dubbed it an independent caucus/town hall. About 35 people showed up.

"The system isn't working," Fricke said in an interview at the library in New Castle, about halfway between Glenwood Springs and Rifle in Garfield County. "It's not fair. Taxpayers have to fund Democratic and Republican party primaries. That's not fair. Independent or third party candidates have to petition onto ballots. That's not fair."

He has a long list of problems that aren't being solved by the party system in the rural west: "Health care, low teacher salaries, a high cost of living and housing, conflict over oil and gas industry regulations."

It's a familiar refrain in Garfield County. Carrie Couey, who chairs the county Republican Party, blames some problems on Democrats.

"We've been deeply hurt by liberal policies," she said.

For instance, the Western Slope pays much steeper premiums than the rest of the state for health insurance. Couey blames that problem on the Democrats' Affordable Care Act. Republicans, she added, are extremely wary of a ballot initiative that would limit oil and gas developments to 2,500 feet away from residential areas. The current setback is 500 feet.

"That puts much of the state of Colorado off limits for drilling," she said.

Those are familiar fighting words -- and messages -- and Couey said they resonate with Garfield County voters.

"The people who are still casting ballots are still electing Republicans in this county 100 percent, except in races where we don't put a candidate to oppose them," she said. "So the people who are actively voting still have the opinion they like what we have to offer."

Mirroring the statewide trend, there are more unaffiliated voters than either Republicans or Democrats.

Yet they don't exert their influence when they have the chance. One measure of that is the state's new system, which allows unaffiliated voters to cast ballots in either the Democratic or Republican primaries. In Garfield County, roughly a fifth of the unaffiliated voters in the participated in the primary.

The chair for Garfield County's Democratic Party, Gretchen Brogdon, sees unaffiliated voters as an opportunity to tip the county blue over time, especially in big races where turnout is generally higher. In the 2016 presidential race, 42.6 percent of those who voted voted for Hillary Clinton while 49.6 percent voted for Donald Trump. While Couey says many Republicans in the region remain deeply satisfied with Trump, Brogdon says many others are angered by him and consider him a "bad" president.

"One of our big pushes in this county is that bad politicians are elected by really good people who don't vote and if we can get that message out there and people show up, it will make a difference," Brogdon said.

To reach unaffiliated voters, one of her engagement strategies is to avoid using the word "Democrat."

"But I turn that number around: There were 1.2 million independents that did not vote," Fricke said, adding that many of them have registrations that state officials currently list as inactive.

Fricke hopes to engage more of them through his new group, Western Colorado Independent Voters, which is calling for yet another change to the state's primary system. The group wants to bring California's "top two" primary to Colorado, where candidates sell themselves to all voters outside of their parties. Yet that idea has critics, who argue that the California system could leave two candidates from the same party as the final choices on Election Day.

Fricke is also concerned about the role of money in politics and thinks reducing it would increase voter participation.

Nuts and bolts conversations about what a democracy could look like resonates with Cliff Redish back at the bar.

"What I believe in everybody should vote and we need educated people, people that understand what's going on," Redish said. 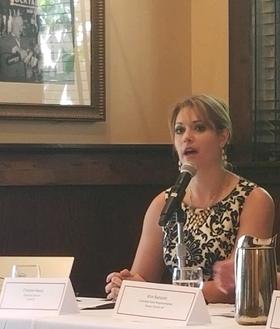 Meanwhile, local forums are adjusting. Grand Junction-based Club 20, a coalition of 22 counties and business, government and tribal and individual interests along the Western Slope, has invited independent candidates to debates.

Executive Director Christian Reece also said unaffiliated voters are welcome to join the club in its processes of outlining positions on issues that are meant to provide a unified regional voice to political leaders.

Capitol Coverage is a collaborative public policy reporting project, providing news and analysis to communities across Colorado for more than a decade. Fifteen public radio stations participate in Capitol Coverage from throughout Colorado.