The town of Bluff, Utah, is home to the Bluff International Balloon Festival.

Earlier this month, the festival – now in its 24th year – kicked off, with hot air balloons, an art fair, and even a little inclement weather.

Picture this: the sun hasn’t risen yet, and all around you, lighting up the predawn dark, are golden jets of fire.

Those are the hot air balloons’ propane burners, which keep the balloons aloft once they’re in the air.

Charles Clark is a crew member for the balloon called ‘Marauder’s Mark,’ named after the map in the Harry Potter book series which reveals the location of everyone in Hogwarts.

Hot air balloons are silent once they’re in the air, according to Clark.

“And you will literally hear your heartbeat,” he said. “It is amazing.”

‘Marauder’s Mark’ is piloted by retired Major General David Eichhorn, with help from his wife, Anita, who likens the entire process of balloons taking off to herding elephants.

“Okay, usually when balloons take off they go – they just go different ways,” she said. “And they go and they separate out.”

On this particular day, Anita is keeping her feet on the ground, assisting her husband by leading the chase crew from below.

A hot air balloon chase crew follows the balloon in cars, turning onto dirt roads and tracking those floating above, in the hopes of finding a good spot for the balloon to land.

But as Anita tracks the balloon in her truck, she says she notices it’s moving too fast to land. And on top of that, there doesn’t seem to be a good place for the balloon to touch down, either.

“All right, chase, say that again – if I go to the other side of the house it's better?" David asked.

Eventually, Anita finds a spot along a red dirt road for ‘Marauder's Mark’ and its crew to land safely.

“Then go set up where you want me to land, please,” David said through the walkie-talkie.

“We made it down safe on the side of the hill,” he said later. “We’re watching what everybody else is doing and they're not finding a good landing site yet. This is a little squirrely because of the fence on the other side, but this will work.”

For an experienced pilot like David, the key thing to remember about being a good balloon pilot is that you can’t use brute force.

“Like today, as we dropped down, the balloon turned right,” he said. “So you have to think ahead. And it's more art than science. All right. And I'm always jealous of people who can play a musical instrument or paint, (or do) sculpture. I mean, the artistry is just amazing. Like I said, I'm jealous of people who can do that. My form of artistry is maneuvering a balloon – like I said, it's finesse – into the right layer to where I go where I want to go. And I can land where I want to land.”

Now, all that’s left to do is pack up the balloon and head back to the Bluff community center, the home base for the festival.

Back in town, David stages an impromptu initiation ceremony for the two sponsors who rode in the balloon. The idea is to pick up a tiny glass of champagne off the ground using only their mouths.

“You flew without wings, so you have to drink with no hands,” David said. “All right, like so.”

Though the balloons are all packed away now, they’ll be back in the clouds next January. 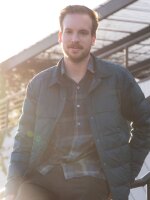